TELAM. Jairo, Falú and Lavandera, in a luxury appointment to open the 63rd. Cosquin Festival 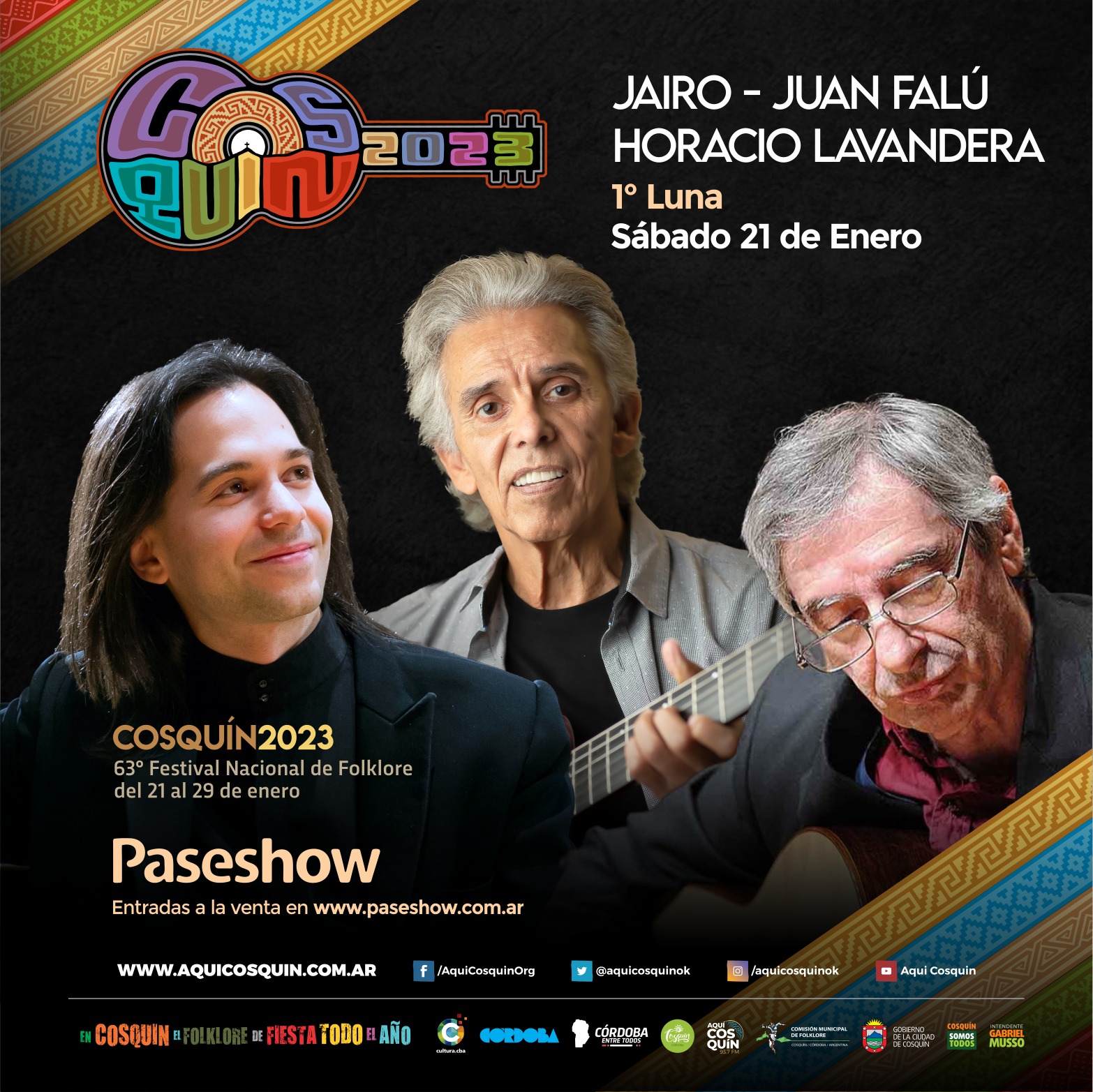 The singer, the guitarist and the classical pianist will share an attractive and unusual space at the opening of the festival. “I think what we will do will be very different from what is normally done in Cosquín,” said Jairo, in dialogue with Télam.

The prominent figures of the singer Jairo, the guitarist Juan Falú and the classical pianist Horacio Lavandera will share an attractive and unusual space in the Saturday opening of the 63rd. Cosquín National Folklore Festival, where they will tour the work of Athahualpa Yupanqui and Nenette Pepin, greet the centenary of Eduardo Falú and celebrate half a century of the vocalist’s career.

“I think that what we are going to do is going to be very different from what is normally done in Cosquín and we are going to try to provide something different for an audience that cannot be taken lightly, that is predisposed to listen,” Jairo points out. during an interview. with telam.

The artist, a remarkable, ductile and current voice with 50 years on the road, adds that “it will be very strong to share again with Juan Falú, who is one of those extraordinary artists, and together propose a kind of introduction of Horacio Lavandera to folklore ”.

The pianist Lavandera, renowned and laureate in the classical universe, assumes in dialogue with this agency: “Getting to Cosquín is a novelty that of course generates great expectations for me.”

“It motivates me that the opening of the Festival is the right opportunity to interpret works by Atahualpa Yupanqui and present others by his partner Antonietta Paule Pepin Fitzpatrick (whose nickname was Nenette Pepin and also signed as co-author under the pseudonym Pablo del Cerro) to the ones that I arrived from the fact that for about two years I have been redoing my repertoire incorporating music by female composers ”, the musician elaborates.

For Lavandera, Nenette’s contribution to the Yupanquian universe is evident because, she says, “it is clear that her academic training could refine Yupanqui’s music, achieving a level of sophistication in her music, where there is one more point of elegance in the sentences and also in the end of the form”.

Juan Falú, one of the most important and influential guitar players in Argentine music, points out that this meeting that arose from an invitation from the interpreter “is going to be a beautiful thing according to how it is proposed because with Jairo there is a fabric between singing and the guitar is a true dialogue and Lavandera is an extraordinary pianist who has that interest and that desire to delve into the language of his land and we are going to accompany him”.

“It seems to me that it is the opportunity for a return that shows the true link I have with the Festival, because I respect Cosquín a lot”, considers the Tucuman artist about this confluence of performers.

With a public controversy in 2014 (precisely in another tribute to his uncle with Liliana Herrero) and after a fleeting return in 2016, Falú points out to Télam: “That was a little-known return, I don’t know why. But it seems to me that this is the moment to reestablish that necessary link with Cosquín, a place that I respect for the search of the public that goes in search of reinforcing a sense of identity in the framework of an encounter that is lived in the streets and transcends the stage”.

The Jairo-Falú-Lavandera meeting will be part of an opening night where -in a grid still with some uncertainties- Juan Fuentes, Yamila Cafrune, Por Siempre Tucu and El Indio Lucio Rojas are also announced, among other attractions.

Asked about the nature of this proposal that brings him together with Falú and Lavandera, the singer confesses that he “loves the idea of doing that kind of thing because it’s not about making fusion but it’s about making music”: “That is, We make the songs that we like, songs that we think are capable of being performed by the three of us and that come out like bombs, they are a fantastic thing that generates a very strong inspiration”.

“It will be a great surprise for people to be able to listen for the first time to a figure like Lavandera who plays like the gods and relive what we do from time to time with Juan but that is always different because he is an improvisor, a great teacher and a great guy who is capable of shining himself and making everyone around him shine”, Jairo risked about the crossing, generated from an idea from the Festival itself.

-It is that if it is not like that, if you do not have the enthusiasm and the passion, the thing does not work. Obviously if you suddenly start to lose physical faculties, well, what are you going to do? But I’m fine, I’ve always sung in the same position, I haven’t had to drop a key to any of my songs for 53 years and I like to sing more and more, it’s like breathing for me.

Being able to keep yourself in that vocal range is a gift? Also, do you study and take care of your throat?

Well, a little of everything. For me the gift is that of all artists and there is a very good phrase that I read many years ago in a prologue to a book of short stories by Truman Capote that caught my attention and stuck with me, where it says that “the of artists, whatever the discipline, is a gift but that God gives you that gift and at the same time gives you a whip to whip yourself”, and it seemed barbaric to me.

But in my case as a singer it’s a gift, but I also never tire of thanking that when I was 15 years old I began to study singing with a teacher who taught me all the vocal technique and that has allowed me to cope with the singer’s life without too much effort.